Metisafe is a professional organization in terms of creating a clean air space that can be affected by dust particles, as well as the application of devices and systems that will provide biosafety during biological and toxic hazardous work. With highly professional mechanical engineers and microbiologists, continuous RD investments, and more than 100 operating equipments, Metisafe is one of the leaders in technological development in the air biosafety sector.

Metisafe equipment and systems operate in low noise and energy saving mode, while maintaining their ability to provide air biosafety when subjected to constant service and maintenance conditions.

At a time when air pollution is increasing and various infections are spreading, the use of high-tech devices and systems developed by Metisafe is very important, and with their help, it is possible to find practical and economic solutions to problems that may occur in various sectors. 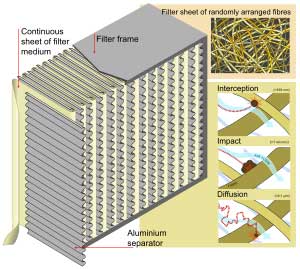 Filters meeting the HEPA standard must satisfy certain levels of efficiency. Common standards require that a HEPA air filter must remove—from the air that passes through—at least 99.95% (European Standard)[4] or 99.97% (ASME, U.S. DOE) of particles whose diameter is equal to 0.3 μm; with the filtration efficiency increasing for particle diameters both less than and greater than 0.3 μm. See the Mechanism and Specifications sections for more information.

HEPA was commercialized in the 1950s, and the original term became a registered trademark and later a generic term for highly efficient filters. HEPA filters are used in applications that require contamination control, such as the manufacturing of disk drives, medical devices, semiconductors, nuclear, food and pharmaceutical products, as well as in hospitals, homes and vehicles.

HEPA filters are composed of a mat of randomly arranged fibres. The fibers are typically composed of fiberglass and possess diameters between 0.5 and 2.0 micrometers. Key factors affecting its functions are fiber diameter, filter thickness, and face velocity. The air space between HEPA filter fibers is typically much greater than 0.3 μm. Unlike sieves or membrane filters, where particles smaller than openings or pores can pass through, HEPA filters are designed to target a range of particle sizes. These particles are trapped (they stick to a fiber) through a combination of the following three mechanisms: 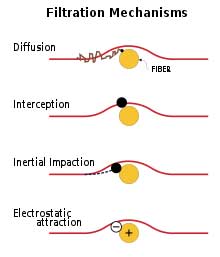 Diffusion
An enhancing mechanism that is a result of the collision with gas molecules by the smallest particles, especially those below 0.1 μm in diameter, which are thereby impeded and delayed in their path through the filter; this behavior is similar to Brownian motion and raises the probability that a particle will be stopped by either interception or impaction; this mechanism becomes dominant at lower air flow.

Interception
Particles following a line of flow in the air stream come within one radius of a fiber and adhere to it.

Impaction
Larger particles are unable to avoid fibers by following the curving contours of the air stream and are forced to embed in one of them directly; this effect increases with diminishing fiber separation and higher air flow velocity.

Diffusion predominates below the 0.1 μm diameter particle size, whilst impaction and interception predominate above 0.4 μm. In between, near the most penetrating particle size (MPPS) 0.21 μm, both diffusion and interception are comparatively inefficient. Because this is the weakest point in the filter's performance, the HEPA specifications use the retention of particles near this size (0.3 μm) to classify the filter. However it is possible for particles smaller than the MPPS to not have filtering efficiency greater than that of the MPPS. This is due to the fact that these particles can act as nucleation sites for mostly condensation and form particles near the MPPS 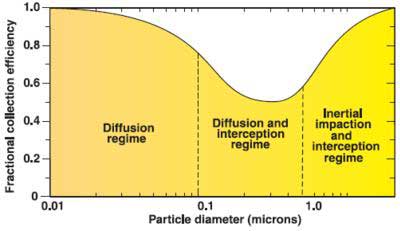 Gas filtration
HEPA filters are designed to arrest very fine particles effectively, but they do not filter out gasses and odor molecules. Circumstances requiring filtration of volatile organic compounds, chemical vapors, cigarette, pet or flatulence odors call for the use of an activated carbon (charcoal) or other type of filter instead of or in addition to a HEPA filter. Carbon cloth filters, claimed to be many times more efficient than the granular activated carbon form at adsorption of gaseous pollutants, are known as High Efficiency Gas Adsorption filters (HEGA) and were originally developed by the British military as a defense against chemical warfare.

Pre-filter and HEPA filter
A HEPA filter can be used in conjunction with a pre-filter (usually carbon-activated) to extend the usage life of the more expensive HEPA filter. In such setup, the first stage in the filtration process is made up of a pre-filter which removes most of the larger dust, hair, PM10 and pollen particles from the air. The second stage high-quality HEPA filter, which filters out the finer particles that escapes from the pre-filter.

Specifications
HEPA filters, as defined by the United States Department of Energy (DOE) standard adopted by most American industries, remove at least 99.97% of airborne particles 0.3 micrometers (μm) in diameter. The filter's minimal resistance to airflow, or pressure drop, is usually specified around 300 pascals (0.044 psi) at its nominal volumetric flow rate.

The specification used in the European Union: European Standard EN 1822-1:2009, defines several classes of HEPA filters by their retention at the given most penetrating particle size (MPPS). The averaged efficiency of the filter is called "overall", and the efficiency at a specific point is called "local

See also the different classes for air filters for comparison.
Today, a HEPA filter rating is applicable to any highly efficient air filter that can attain the same filter efficiency performance standards as a minimum and is equivalent to the more recent National Institute for Occupational Safety and Health N100 rating for respirator filters. The United States Department of Energy (DOE) has specific requirements for HEPA filters in DOE-regulated applications.

Marketing
Some companies use a marketing term known as "True HEPA" to give consumers assurance that their air filters meet the HEPA standard, although this term has no legal or scientific meaning.Products that are marketed to be "HEPA-type," "HEPA-like," "HEPA-style" or "99% HEPA" do not satisfy the HEPA standard and may not have been tested in independent laboratories. Although such filters may come reasonably close to HEPA standards, others fall significantly shor

Safety
HEPA filtration works by mechanical means unlike the ionic and ozone filtration which use negative ions and ozone gas respectively. So, the chances of potential pulmonary side-effects like asthma and allergies is much lower with HEPA purifiers. To ensure that a HEPA filter is working efficiently, they should be checked and changed at least every six months in commercial settings. In residential settings, they can be changed every two to three years. Failing to change a HEPA filter in a timely fashion will result in it putting stress on the machine or system and not removing particles from the air properly

Biomedical
HEPA filters are critical in the prevention of the spread of airborne bacterial and viral organisms and, therefore, infection. Typically, medical use HEPA filtration systems also incorporate high-energy ultra-violet light units or panels with anti-microbial coating to kill off the live bacteria and viruses trapped by the filter media.Some of the best-rated HEPA units have an efficiency rating of 99.995%, which assures a very high level of protection against airborne disease transmission.

Hepa filter effect inside home HVCA: without (OUTdoor) and with filter (INdoor)
Heating, ventilation, and air conditioning (HVAC) is the technology of indoor and vehicular environmental comfort, use air filter for remove polluted outside and inside (smoke, viruses, powders...). The HEPA filter is very useful in polluted cities for maintaining health

Airlines
Modern airliners use HEPA filters to reduce the spread of airborne pathogens in recirculated air. Critics have expressed concern about the effectiveness and state of repair of air filtering systems, since they think that much of the air in an airplane cabin is recirculated. Almost all of the air in a pressurized aircraft is, in fact, brought in from the outside, circulated through the cabin and then exhausted through outflow valves in the rear of the aircraft.

Motor vehicles
In 2016, the Tesla Model X was announced to have the world's first HEPA-grade filter.[26] Following the release of the Model X, Tesla has updated the Model S to also have an optional HEPA air filte.

Updating traditional ventilation systems within the scope of cleanroom technologies